I’m a week away from finally resolving (this chapter?) the saga of This Damn Cyst.  And, that, at least, seems well in hand.  For the uninitiated, I was diagnosed with a…rather large ovarian cyst in July, it was supposed to come out on August 27 at Swedish Covenant hospital.  On the 26th, at 4:30pm, my insurance company decided it was the appropriate time to notify the hospital and myself that I was out of network, prompting the hospital to cancel said surgery.  So now I’m at Northwestern, getting sliced and diced on the 5th.

Northwestern is pretty great.  The people at the registration desks talk to you like you’re a human being.  My surgeon is great.  She’s maybe one of the best people to be doing the procedure I’m having.  They, you know, actually prepared me ahead of time and sent me helpful PDFs of things to do/not do before surgery.  I’m not saying that none of that was done the first time I was supposed to go in, but… it wasn’t.

I think about this time last year, because my partner spent six months being… quite ill, and uninsured, so we spent SO MUCH time in the public hospital here in Chicago.  Where they don’t even give you a real appointment, they just tell you to get there at 6am and wait until they can see you.  Which might be at 9am, or noon, or 6pm, or never.  It’s like IDES, where I spent an inappropriate amount of time in and around 2013, when I left Provision.  You sit in uncomfortable, federal-office chairs under uncomfortable, federal-office fluorescent lighting, and wait.  You, and everyone around you, is treated like chattel.  It’s really demoralizing.  It’s demoralizing for me and Kenneth, and we’re both well-educated individuals who live in a nice neighborhood and typically pass for normal.  I can’t imagine how it is for people who get treated like that *everywhere* because they don’t have the same passing privilege we have.

But, so, the saga of This Damn Cyst is nearing its end.  And so is 2019.  And I’m so. happy. to see it go, honestly.  This year has been one thing after another thing after another thing.  I was dropped into 2019 broke and behind on my bills because I had to do everything for us myself.  I took Ubers home from the show every week because I don’t like being alone on the train at 1am.  Kenneth helpfully reminds me now and again that he was still buying us dinner sometimes, but every time I went out to pick it up, I would buy myself a drink while I waited.  I took myself out when I was alone, and ordered take out for myself most days because I had no mental or physical energy to do anything anymore.  Once Kenneth got better, my car broke down.  And I bent a rim on a massive pothole in Highland Park.  And I blew out a tire.  And my window needed fixing.  And then finally, Justin overheated and gave up the ghost for the last time, and I needed to get a new car, which I am immensely grateful for having, but the whole ordeal was emotionally draining.  THAT was happening at the same time as This Damn Cyst chapter 1.

On top of all of that, private gigs and bachelorette parties are thin on the ground, I haven’t been back to The Backdoor Saloon (and its impressive paycheck) since New Years’ Eve, I had to drop at least 4 shows for botched surgery #1 and actual upcoming surgery #2.  I’m still $3000 short of last year’s income, and I have absolutely zero bandwidth to do anything about it except hyperfocus on the number and hear screaming in my head.

I hate needing help because sometimes people I finally sort of figure out how to maybe kind of sometimes let my guard down around end up leaving me in a situation where I have to pay $500 of money that’s supposed to be paying my medical bills to buy out the rest of my gym contract.

I told Kenneth the other day that sometimes the inside of my head is this scene with the tub in Melancholia: 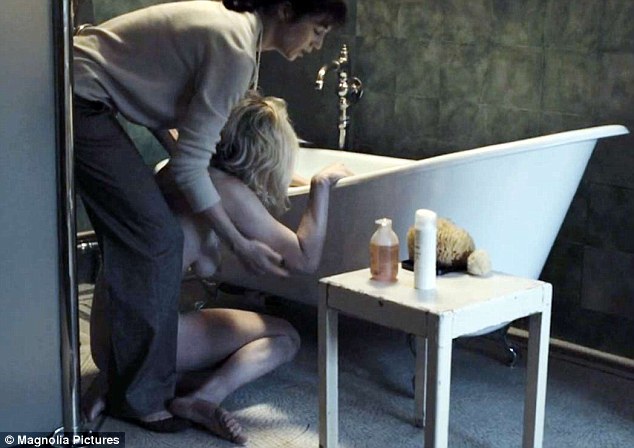 I know I’m working through some period of something that needs to happen in order for me to continue to grow.  But right now, it just feels like being exhausted from years of scraping by and trying to survive.  I’m so goddamn tired of surviving all the time.  I just want it to be my turn to live.

Vox arboribus (or: why does everything need a clickbait title?)